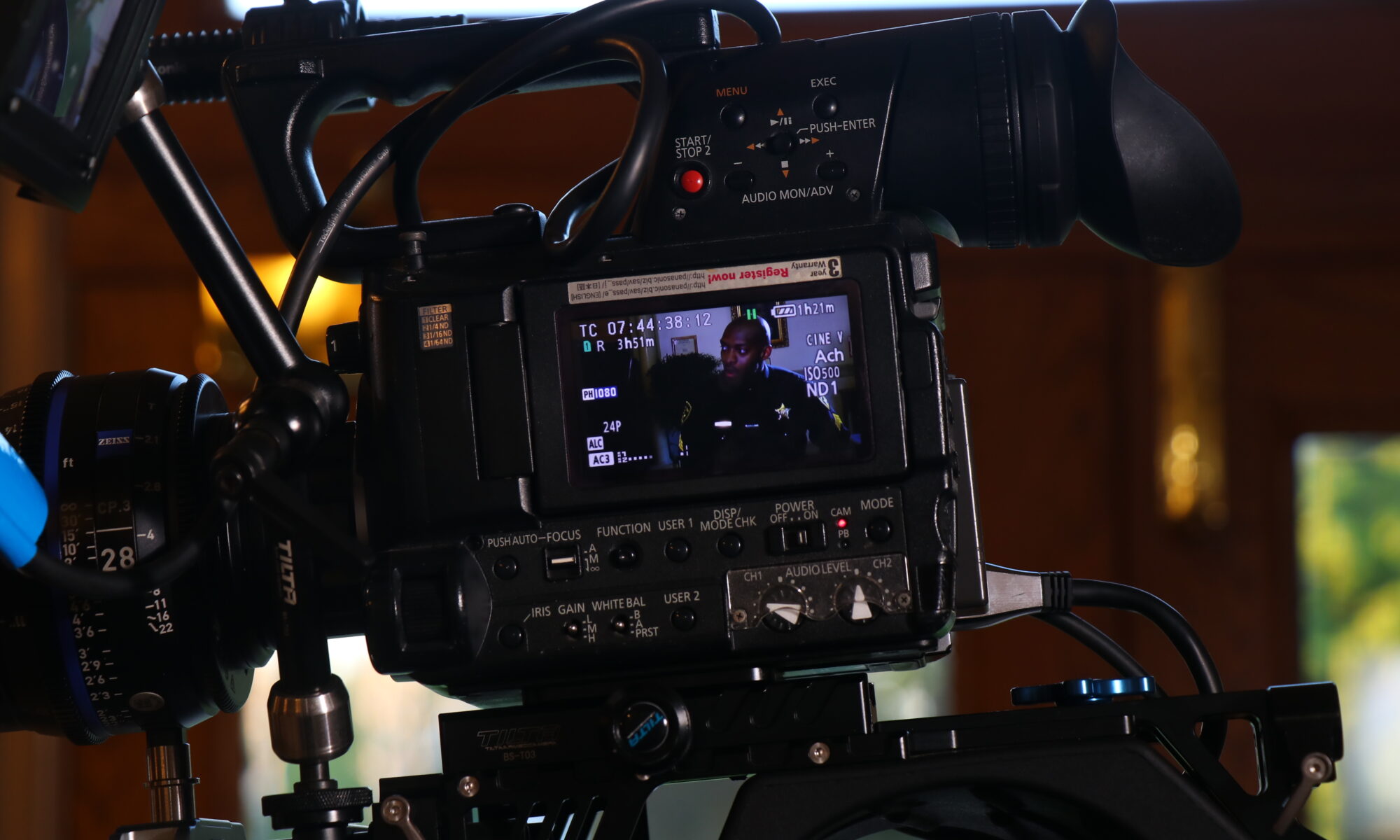 LOGLINE
After a public access TV producer is forced into the role of local game show host at her station, she struggles with unwanted fame and expectations.

SYNOPSIS
SUNDAY GUY (31) is an average producer at a below-average public broadcast station, looking to live an above-average life. Despite the fact she suffers anxiety attacks when she’s overwhelmed, Sunday dreams of being a producer on an investigative TV crime show. But that dream comes to a screeching halt when a regional game show host keels over and dies live, on the air, changing the status of the little public broadcast station and Sunday’s life.

Sunday, producer of the game show ‘Stump The Student,’ takes on a new level of anxiety after she is convinced by Director MACY HAAS (62) to take the dead guy’s place. As the mortified high school contestants watch the deceased host being dragged out of the studio, Sunday manages to keep the live game show going, despite needing to breathe heavily into a paper bag once or twice. The broadcast of the entire show goes viral, and suddenly Sunday is a sensation.

Enter Sunday’s mother, CELIA (50s), a fallen con-artist who has no home and no money. Desperate for a new con, she moves in with Sunday, secretly armed with ideas on how to bank on the viral video. If Celia has her way (and trust that she will), this won’t be the first viral video for her to bank on. To hide beneath her plan, Celia declares she will become Sunday’s PR person. Despite Celia’s selfish ways, she ends up doing a bang up job and Sunday becomes a national sensation.

This whirlwind of change blows in just as Macy is about to retire. Before this, she was counting down the days. But she decides to stick around as new life is breathed into the show by associate producer, CHIP TUCKER (23).

Sunday Guy is a half-hour comedy series that follows Sunday on her unwanted journey to success. She doesn’t want to be a game show host. But each time she tries to move out of the role, she is reminded by outsiders that she should be so lucky. She has fame. She has fortune. She even has a handsome Ken doll look-alike on her arm in all the rag mags. But none of it makes her happy.

To add insult to injury, if Sunday leaves the show the station will fall into financial stress and jobs will be lost. So when her identical twin sister, TUESDAY GUY, shows up to help Sunday cope with the madness of unwanted fame and their con-artist mother, Sunday wonders if Tuesday just might be the answer to keeping the show alive, the station financially strong, and her path to her crime show passion unblocked.

LOGLINE
When a new mom in town pulls a group of parental misfits together to help hydrate and encourage an underdog high school marching band, it results in watery warfare after a jealous rival tries to sabatage the band in order to become “Water Mom of the Year.”

SYNOPSIS
The Water Mom is a rare species. In certain parts of the country, she comes out during the summer months to hydrate dozens of high school marching band children (most of whom have no desire to be marching) during parade season in an effort to keep them peppy and alert.

Not only does the Water Mom offer band members water during a march, spray the backs of their necks on the hottest of days, ensure all other Water Moms (and Dads) match in attire, and ensure their own choreography is bar none as they dance, leap, and pass water bottles to the high school students, a true and proper Water Mom genuinely cares for all of the children. Even the ones that are a pain in the ass.

And yes, Water Moming is a real thing.

GRACE ALLEN (42) is one such creature. After the untimely death of her husband, Grace relocates to the community of Lakeshore with her teeny-tiny tuba playing daughter, RUBY (14) for a fresh start. During their first down-home country parade, Grace discovers the band has no parental support.

The kids are dying of thirst and sweating to death. And frankly, they suck.

An already experienced Water Mom, Grace starts a new club at Lakeshore, much to the chagrin of Lakeshore High’s biggest rival mom, MIRANDA MOODY (35). Miranda is a Middle Heights Academy mom, determined to take home the “Water Mom of the Year” trophy. Her perfect teeth, Barbie-doll like figure, and nasty, entitled attitude leave little to be desired. But Miranda needs validation. And it exists in a trophy that, this year, she’s certain Grace will win.

To nab the trophy, Miranda plays dirty in an attempt to sabotage Lakeshore High from qualifying for the biggest parade of all, The Sherburne Pageant of the Bands.

But Grace Allen and her troupe of misfit parents won’t have it. To save the kids from sabotage during the biggest parade competition of the year, Grace is forced to confront her past while allowing her daughter Ruby to be herself and choose her own future – something Grace isn’t so sure she’s prepared to do without her husband by her side.

LOGLINE
A thrill-seeking TV reporter turned tenacious vigilante finds herself slying the bad guys at night, only to turn around and cover the deaths with her own twist, live on TV the next day.

SYNOPSIS
DAWDY PUGG (30) is on her way to Miami Beach for the best reporting job ever. But thanks to a few ignorant thugs who think she knows a woman named Frieda Friday, Dawdy ends up kidnapped, drugged, and framed for Frieda Friday’s murder.

It’s not such a bad place to be, considering she caught one of the thugs threatening her on tape, and that tape can earn her another Emmy for “on-the-front-lines” reporting. But when she accidentally kills one of her kidnappers, everything goes south. Dawdy ends up in jail accused of not just one murder, but two.

Behind bars, Dawdy meets her murderous mentor, BEATRICE BICE (65). Beatrice teaches Dawdy the ways of a hands-off murderess. Without ever pulling the trigger or slashing a single throat, Beatrice shares with Dawdy dozens of ways to kill the bad guys by staging the killings as accidents.

“The advantage you have is that camera,” Beatrice tells Dawdy. “You can tell the world aaaanythingyou want, and they’ll believe you.”

Armed with this knowledge, Dawdy makes her way back to the newsroom and onto the streets of Doverling, taking out the menaces of the world, one by one.

LOGLINE
A secrets and scandals writer stuck in the sticks of a redneck town turns to a celebrity drug dealer for career advice in order to keep her own secrets from being exposed.

SYNOPSIS
RICKY RICHMOND (45), a seemingly prim and proper wife and mother, yearns to escape the redneck town she’s trapped in to chase big time dreams as a novelist. If she had her way, she would co-write a book and go on tour with the famous mystery writer, Peter Searle, who intentionally hides his face on his books and at signings as part of his “mysterious” persona. But in order to follow her passion and escape the sticks, she’s got to keep a shameful secret under wraps; a secret that is about to cost her $60 thousand dollars.

Enter celebrity drug dealer, MAC FISHER (60). Many in the community are fascinated with the scholarly drug ringleader because he’s been able to elude authorities for so long. But when District Attorney CLARK RICHMOND (52) gets to the root of his drug ring and busts it up, he puts Mac Fisher behind bars.

Did we mention that Clark is Ricky’s husband? Yeah. It’s a problem.

LOGLINE
After the mercy killing of his grandmother, a frightened young black man kidnaps a highly emotional white woman to drive him to freedom. The culture clash in the car will change their lives in ways neither could have ever thought possible.

SYNOPSIS
PAIGE WARD (37) is on the brink of an emotional melt down. Her daughter is an addict, her marriage is falling apart, and she can’t stand what her life has become. Little does she know that the night she decides to leave it all behind is the same night she is held at gunpoint and kidnapped by an equally emotional black man. He threatens to shoot her if she doesn’t drive.

Surprisingly, she isn’t frightened. Where most would cower in fear, Paige explodes with anger, instead. She has already been pushed to the brink, and some random guy with a gun isn’t going to tell her what to do.

Her actions take VICTOR ATLAS (28) off guard. He’s the stereotypical black guy with a gun, isn’t he? Why wouldn’t she be afraid of him? Hiding his own fear, he aggressively threatens to shoot her if she doesn’t put the car into drive. This time his threat works, and she complies.

Meantime, down the road in a rundown neighborhood, Detective MARTIN WARD (40) a police detective and Paige’s overworked husband, stands over the dead body of an elderly woman. He believes ex-con TREVOR ATLAS (32) is responsible for the shooting death of his grandmother. But Trevor’s wife says Victor did it. Either way, two brothers are on the run in opposite directions. Martin and a team leave the scene to pursue Victor, while a second team pursues Trevor. Both men have been pinged via their cell phones. During the search, Martin learns that Paige’s cell phone is in the same location as Victor’s. But he has no idea why.

As Martin continues the manhunt to find Victor and bring Paige home safely, Paige struggles to understand why Victor is in so much pain. At the same time, Victor quietly realizes that she isn’t the privileged white woman he thought she was. She’s also experienced death and tragedy. Their skin color may be different, but the pain they’ve endured is the same. Despite this realization, their emotions and cultures still clash. At one point Paige sees an opportunity to call for help on her cell phone. This enrages Victor, and he smashes the car window and throws both of their phones out.

Now Martin has no idea where they are.

As Victor’s rage ebbs and flows, so does Paige’s empathy toward him. At one point, they find a moment that is without anger or judgment. But the moment comes to a screeching halt when a deer jumps out of nowhere, forcing the car off the road and into a lake.

The car begins to sink quickly.

Paige is stuck in the vehicle, trapped by her jammed seatbelt. Victor is not. He looks at her one last time, and escapes out the back window before the car fills with water.

It is in this moment that two completely different people will make decisions that will change the trajectory of their lives, and the lives of those around them, forever.